The Club’s Heraldic Crest and Motto

The Club borrowed its crest and motto from John Pendennis, the Major and Pen. John, in his rise up the social ladder, first “had a gig with a man to drive him” but later on “his poor old mother had the happiness of seeing him from her bedroom window, to which her chair was rolled, her beloved John step into a close carriage of his own, a one-horse carriage, it is true, but with the arms of the family of Pendennis handsomely emblazoned on the panels.” 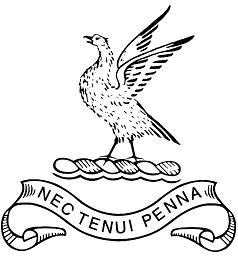 Major Arthur Pendennis, we are told, wore an elegant ring also “emblazoned with the famous arms of Pendennis.”

And when John died and was buried in the abbey church of Clavering St. Mary’s, “a fair marble slab” was erected over his pew.

“On it you may see the Pendennis coat of arms and crest, an eagle looking toward the sun, with the motto ‘NEC TENUI PENNA,’ to the present day.”

The motto means, literally, “nor on weak wing” and has given rise to the oral tradition that it means that the members of the Club are high flyers. A more scholarly tradition identifies it as a fragment from an ode by the Latin poet Horace, the first two lines of which translate:

“On neither weak nor vulgar wing shall I be borne through liquid air.”

One can conclude that the two traditions converge, with the former having an ounce or two of truth.